Made incandescent by the fire which had engulfed it, one of the most emblematic coastal ships of the interwar period was still somehow floating proudly off the coast of Megara. The FRINTON of the Igglesi Steamship Company. The FRINTON on anchor.

It was built in 1903 at Clyde Shipbuilding & Engineering Co in Glasgow as the KILKENNY for the City of Dublin Steam Packet Co. and originally ploughed the Irish Sea, between Liverpool and Dublin. The single-propeller steamer had a total capacity of 1,419 tons and dimensions of 82.3 x 11 metres and a maximum speed of 14 knots. In 1917, it became part of the Great Eastern Railway and transported goods on the Harwich-Rotterdam route. In 1919 it was renamed the FRINTON, the name of a small coastal town where there was also a railway station. In 1923, its owners merged with other rail companies to become the London & North Eastern Railway. FRINTON in 1939-1940, with the Greek flag painted under the bridge, as a sign of neutrality.

In 1927 the Igglesi family from Samos, which had industrial and shipping interests, bought the British steamer. It was sent to Antwerp, where one of the five brothers, Nicholas Igglesi, oversaw restoration work on the ship. Two months later, in February 1928, the ship sailed to Piraeus and raised the Greek flag. Although there was talk in the press at the time of a possible renaming to SAMOS, the ship retained its name and was registered in Piraeus (No. 585) as the FRINTON. It soon started operating as a passenger ferry on the most important lines: from Piraeus to Ikaria and Samos, through Syros, Tinos and Mykonos, from Piraeus to Patras, Sami, Corfu, Agios Saranda and Brindisi, as well as others. In the meantime, the Samos Steamship Company of D. Igglesi & Sons was established, and the ship was incorporated into its fleet. It was re-registered on the island of Samos as No. 8. In the following years, the FRINTON alternated on the main ferry lines with the other Igglesi ships, the ALBERTA and the SAMOS.

Faced with the growing threat of war, the Greek government imposed emergency powers to take control of many privately owned ships in 1939. By law it obliged all ferry ships, including the FRINTON, to amalgamate into the Joint Directorate of Ferry Transportation. In the summer of 1940, the Italians attempted to rile the Greek government with a series of unprovoked attacks on Greek ships. They thought that this would force the government to withdraw the British naval forces from the Aegean in addition to lowering the morale of the people. On July 12, Italian aircraft unsuccessfully bombed the lighthouse auxiliary ship ORION, believing it to be a British oil tanker. They also attacked the destroyer HYDRA when it rushed to the ORION’s aid. This was followed by the bombardment of the navy fleet anchorages at Itea and Nafpaktos, as well as an attack on the A-6 coastguard vessel in the Saronic Gulf, without causing material damage. The culmination of these hostile acts of a war which remained undeclared came on the morning of August 15, 1940 with the torpedoing of the cruiser ELLI in Tinos. A few hours later, at 18:20, two Italian planes attacked the FRINTON while it was sailing from Chania to Heraklion. Renowned Captain George Veis (the post-war captain of the DESPOINA and the PANTELIS) was on the bridge of FRINTON. His skillful maneuvering avoided the Italian bombs. FRINTON returned safely to the port of Piraeus, the only signs of what had happened being the broken glass in the portholes of some of its living quarters. The stern apartments that once housed the B ‘class, damaged by fire. An anti-aircraft gun can be seen. (collection M. Ghiglino)

On October 16, the government ordered FRINTON to be turned into a warship and equipped with anti-aircraft guns for self-defense. In the following months, the ship carried out a series of transport operations for the military, mainly moving between Souda, Heraklion, Piraeus and Mytilene. As the Germans rapidly pushed southwards after their invasion across the Bulgarian and Yugoslavian borders on the April 6, 1941, the Greek authorities were slow to withdraw the naval fleet to Crete and the Middle East, where they could contribute to the Allied struggle. Most ships remained exposed to German bombers in the Saronic Gulf for days, awaiting orders which never arrived. On April 17, the FRINTON, along with the IONIA, CORINTHIA and HELLAS, became trapped inside the Gulf of Eleusis because the Germans had laid magnetic mines at its exits. Captain Melissinos was sent by A/GEN [chief commander of the fleet] to deal with the situation. Ordering them to sail in single file, he successfully lead all four ships through Poros Megaron and out of the Gulf. However, the FRINTON remained in the area around Megara, awaiting orders. As a result, it was hit by German dive bombers on April 22, 1941 and began to take on water. To avoid sinking, Captain Veis ran the FRINTON aground on the Nea Peramos coast, about one kilometer east of the Artillery School. Unfortunately, German planes also attacked it there, hitting the engine and boiler rooms. A fire broke out which completely destroyed the ship. The crew, thirteen of whom were injured, abandoned ship and made for the shore at Faneromeni in lifeboats. One of them, the stoker Georgios Tzitzis, later died from his injuries. In the ensuing years, the occupying Axis forces engaged in the spasmodic exploitation of some shipwrecks which were unrepairable, but a source of useful raw materials. The wreck of the FRINTON and the nearby passenger ship HYDRA, had the decks and engines removed respectively. Demolition works were carried out on the passenger ship SOFIA, which was stranded at Agios Georgios, Salamina. In a post-war inspection carried out on the FRINTON, cracks one metre below water level were found measuring 4 x 3 metres on the starboard side and a 12 x 1 metres on the port side. The deck of the ship was half-destroyed, the engines and machinery were damaged, while three boilers remained in good condition. With such extensive damage, there was no hope of repairing the ship. Like many other abandoned shipwrecks, it fell under the jurisdiction of the Shipwreck Lifting Organisation (O.A.N.), a body set up by the State to clear the ports and coasts of dozens of shipwrecks left behind by the warring parties. The wreck of the FRINTON was sold by O.A.N. in 1948 to the salvage contractors Archontis and Georgakakis for 50 million drachmas. It was to be raised and then dismantled for scrap. This work was completed in December 1950, thus ending the existence of one of the most beautiful coastal ships of the interwar period. 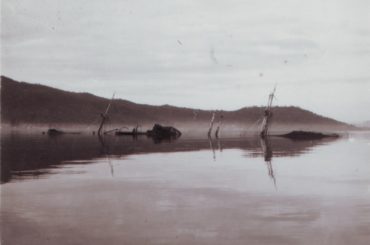 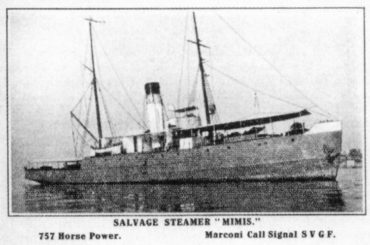